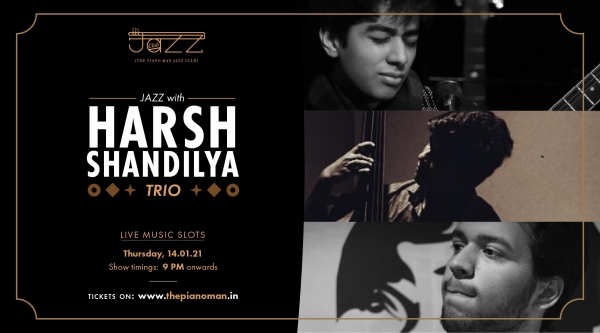 Harsh Shandilya is a guitarist based out of New Delhi. Having spent two semesters at Global Music Institute, studying under Antonio Molina Moya and Aditya Balani. Influenced by artists such as Joe pass, Jonathan Kreisberg and Oscar Peterson his playing can be best described as traditional yet relaxed. Under the guidance of renowned pianist Aman Mahajan, Harsh is trying to explore various sounds in Jazz and promote the art form in the city.

Aditya Dutta is a professional drummer based in Delhi. He is a part of the Pianoman In house band for Sunday Musician Mixers. Performing and collaborating as a sessions drummer in the Delhi independent music circuit for the past 1 year, He has actively played with Rainer pusch (Germany), Karan Khosla Trio, Aditi Dot., Rythem Bansal, Rie Ona (Japan), Ipshita Roy and various other musicians and acts from the city.

He also serves as the drum faculty at various music schools across the city and actively provides private lessons to people keen on learning drums.

Please enter your email address to request a password reset.